Vortex was designed specifically for the unusual 6-sided exhibition space at the Prema Arts Centre, which was housed in a former Georgian Chapel in rural Gloucestershire. The first floor space also had an extremely high ceiling, which made it ideally suited for floor projection. I proposed to project a large circular image of a whirlpool onto the floor and to build a special viewing platform around it. I planned a work that would occupy the space acoustically, visually and physically, with an image, a sound and a sculptural structure that were totally integrated.

The central video image of Vortex was a macro shot of a domestic drain with spiralling water, enlarged to a diameter of eight feet. I chose to record the original video sequence on the “Betacam” tape format, which is capable of infinitely variable speed and reverse slow motion. The sequence was manipulated in post-production using both forward and reverse variable speed slow-motion, producing an image-sequence that began at normal speed, gradually slowed down until it fully stopped, then in reverse motion gradually increased speed until it reached full speed again, then forward again, and so on, in a repeating forward-reverse action loop. This variable speed disappearing and reappearing whirlpool of water was complete with soundtrack, so the sound reinforced the shifts in tempo and direction, the slow motion sound producing a deep and menacing rumble which resonated throughout the building. I wanted to play with the illusion of surface and depth implied by the image, and introduced a superimposed layer of electronically-generated text. This text, applied to the image-sequences using vector-mapping techniques, was given artificially produced perspective which matched the movement and scale of the text to the spiralling vortex of the water currents, so that the words seemed to be drawn into the whirlpool, reducing in size as they spiralled down into the centre of the drain and disappeared into the abyss. 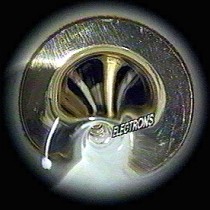 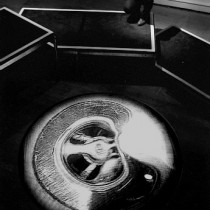 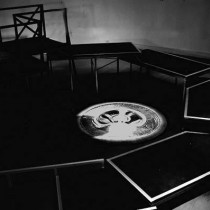 This use of texts as image has been an aspect of a number of works I have made across the period under discussion. In The Stream, simple texts appear at points in the flow of the tape to reinforce the idea of self-reflection and contemplation in relation to contrary states of mind: “I Am/I Am Not; I Can/I Can Not; I Will/I Will Not, The “I” as an active participant in the flow of cognition. In The Room With a View , the text was utilised to signify an autobiographical recognition of the self: “Me”; and “Me Then”, etc.

In Vortex , the text is less personal and more connected to the idea of something in contrast to either the fluid whirlpool imagery or the spiral walkway:

The texts are intended to act as a bridge between the image (the whirlpool) and the structure (the spiral walkway). The words themselves, when superimposed onto the moving video sequence, become honorary objects, floating on the surface of the image and then being submerged into the vortex itself, seemingly distorted by same gravitational forces which are made visible by the behaviour of the water. Thus I intend that the words/phrases will help to make visible the ideas within the work- to mirror the actual relationship between the video image and the original phenomena it represents. The words in Vortex occupy a distinct middle ground between experience and phenomenon, offering a simplified (and hopefully poetic) version of everyday experience- sandwiched as they are between the mind and the world.

2. A stanza from the poem Words by W.H. Auden which refers to the ambiguity of spoken words .

A sentence uttered makes a world appear
Where all things happen as it says they do;
We doubt the speaker, not the tongue we hear:
Words have no word for words that are not true.

Vortex had the largest physical structure of any work that I have made to date. Designed to enable the viewer to move around the circular whirlpool image and as she/he walked upwards to a vantage point overlooking the image, this spiral ramp started at floor level and via six steps reached a height of approximately 4 feet. As the space was in semi-darkness, with only the reflected light from the whirlpool to illuminate the space, the edges of the walkway were lined with reflective material, and the viewing platform had a raised guard-rail. Loudspeakers were positioned under the walkway to maximise the impact of the soundtrack.

The theme of the vortex spiral is also meant to operate on several levels. The vortex of water and the physical movement of the spectator around the image were intended to mirror the electro-magnetic processes at work in producing (and re-producing) the video image. I wanted to suggest that the rotating action of the video recording and playback mechanism- the spiral formed by the video tape in the helical scan mechanism were exploiting the same elemental forces.

In summing up my ideas about the piece in the exhibition statement, I wanted to place the work in a place where the imaginary world of the image and the physical space in the gallery were held together by the installation. For me Vortex was an attempt to occupy a kind of ‘middle ground’ between the total illusion of the image on the screen and the real physical presence of sculpture, with the words appearing and submerging, making transitions between these two possibilities:

The image of the vortex represents a point of transition into an unknown place or state. the constantly disappearing water provides a visible representation of an invisible (but real) force. The texts float between the two worlds of the physical and the illusory, a part of both and yet also occupying a place of their own.