The proposal for Streamline which I made to the Bluecoat Gallery in Liverpool for “New Art Northwest” in January 1991, stressed the potential physical interactions between the audience and the work. I wanted to continue exploring ideas about the movement across screens, and about the slender ‘narratives’ which could be expressed through this temporal dimension which I considered to be an aspect of the formal ‘shape’ of the work. I was also particularly interested in aspects of the relationship between technology and nature, and with notions of the ‘natural’ and the ‘artificial’, and to the idea of bringing aspects of landscape into a gallery space

The original proposal was for a work comprising of fourteen screens and fourteen video players, but this was trimmed first to ten channels, and eventually to nine for logistical reasons. I had conceived of the piece as one which would cross an entire gallery floor, encouraging visitors to cross the space following the motion across the monitors. The bridge seemed an apt device, as it had both a metaphoric and a practical dimension; it would serve as a viewing platform and provide a way of crossing the room. It also reinforced the landscape concept and linked with the sub-theme of communication; the ‘bridge-building’ implied by the message between male and female, between one side and the other. It also suited my taste for symmetry, simultaneously crossing the centre of the line of monitors and connecting the two halves of the space created by the bisecting line of screens.

If the synch-starter had been important to the synchronising of the four tape sources in Eau d’Artifice, it was crucial to the functioning of Streamline. The movement from screen to screen relied on exact timing, and it relied on the consistency of that timing. The nine channels of video needed to be in synch, and most importantly, to stay in synch, in order for the work to function. 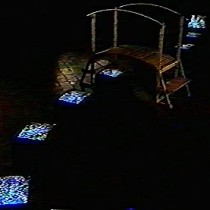 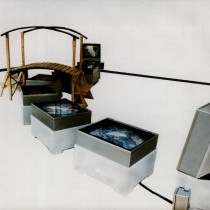 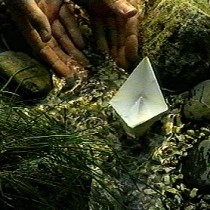 Proposed for a gallery space, it was, in the end, shown in a public space. Streamline was commissioned by the Bluecoat Gallery to be exhibited at Mercury Court, Liverpool, August 12th-August 30th, 1991.

Mercury Court, Liverpool, was a business centre with a large atrium – a very public space and a busy thoroughfare. The audience for the work was varied and numerous- very different from the specialist and knowledgeable visitor to a typical gallery or video art venue. These advantages were balanced by difficulties caused by high levels of ambient light and the visual clutter caused by an abundance of large potted plants.

There were also compromises to the conceptual aspects of the work. For example, because of the security risk, I was unable to have the nine video players and two interlinked synch-starters on display, as I had intended, and they had to be hidden away in a lockable cupboard adjacent to the floor space. Noise levels were also an issue and the soundtrack volume had to be raised to overcome this. I also had to convince the building management of the necessity to keep the ‘canned’ music from being piped into the atrium during the exhibition period.

The main venue-related problems however, were in relation to the light levels. Unlike the controlled atmosphere of an art gallery, where lighting levels can be modified to suit the work on display and remain constant, the atrium at Mercury Court was designed to maximise the available light, and was not controllable. Streamline was exhibited during the summer, so there was often considerable sunlight, which tended to overwhelm the video image on the monitors. I was using 27 inch Sony Trinitron ‘Pro-feel’ monitors, and these had to be adjusted to give the maximum brightness and contrast to compensate for the ambient brightness. On cloudy days, however, these adjustments would make the image seem harsh. Related to this, the high light levels and numerous glass surfaces generated considerable reflection, which meant that some monitor screens could not be viewed from certain angles.

Streamline was shot and edited on ‘Hi-band’ U-matic SP (Special Performance), with exhibition copies made onto ‘low band’ tape stock. The U-matic format at that time was still the most reliable playback format, and had the crucial advantage (for Streamline ) of the synch-starter. The tape format is incredibly rugged; during the 3 week exhibition (7 days a week, nine hours per day) of the piece at Mercury Court I used only two sets of playback tapes.

Initially I tried to shoot the images for Streamline on location, but I was not satisfied with the technical quality of images I was able to record, nor could I control the speed and direction of the paper boats. My solution was to set up a series of miniature indoor ‘stream’ sets, which enabled a far greater degree of control over the lighting, the angle of shooting and the speed and flow of water, – not to mention the weather conditions!

This working method was similar to the shooting of the elements of Eau d’Artifice, which were all recorded in the studio. The use of artificial sets gave the images a particular ‘look’ which I found appropriate, as a constructed ‘stream’ made of carefully rearranged elements suited the themes of nature and culture, and ideas about ‘landscape’ that I was seeking with this work.

The installation consists of nine very accurately edited tapes, each looping a cycle of approximately 4 mins. The tapes are timed so that when they are running in synch, a paper boat launched at one end of the line of monitors by a pair of female hands is seen to move across the line of screens to be retrieved by a pair of male hands at the other end. Once this cycle is complete, the image on all nine monitors ‘freezes’, and the cycle reverses, the image of the launching female hands appearing at the opposite end of the line of monitors and the cycle beginning again, this time moving across the line in the opposite direction. This forward-reverse action of launching, flowing across the line of screens and retrieving continues until the sixty minute tape has played through, then the tapes rewind and restart, and the process begins again.

Structurally, the work is based on a chain of interrelated loops. Each tape contains edited loops of a specific timed sequence, the entire line of monitors operates as a loop, continually repeating a forward-backward motion. (The image sequence never goes backwards but has been electronically ‘flipped’ in post-production, so that the same sequences were seen to move in the opposite direction. ) Once the tapes have completed an entire one hour (the limit for the U-matic format) pass of repeating loops, the tapes rewind and replay, which involves another level of looping.

Being able to accurately synchronise nine channels of images had a profound effect on my way of thinking about the ‘shape’ of Streamline. As discussed above, when using a post-production effect such as the ‘flip’, which I had used before, for example in the videotapes An Imaginary Landscape and The Stream, the image change was limited to a single motion within the flow of unfolding images on a single screen. Using that same image effect across a line of screens simultaneously affected the entire ‘shape’ of the installation. An image effect then becomes a spatial one, by virtue of the scale of the movement. It seems to be about the interrelationship of moving image and movement across space- the whole line of monitors has become an kind of animated ‘object’ akin to kinetic sculpture. Working with these elements I was again aware of the close relationship to music that working with moving visual abstraction often evokes. I had graduated from ‘composing’ for a single performer to composing for an ensemble. In comparison to the task of a composer, I was working with very a simple structure, and the interrelationships between and across screens was very basic, but it gave me a glimpse into the a potential for the medium I was making tentative first steps towards.