The project brief for “River Crossings”, devised by Camerawork, was for site-specific lens-based works in relation to a number of designated sites along the River Thames. The potential of the Cafe Gallery in Southwark Park particularly interested me, as the description immediately identified aspects which I felt were particularly relevant to the concerns of previous work. The commission brief described it very accurately:

The Cafe Gallery in collaboration with Camerawork proposes to commission an installation for the gallery and derelict adjacent lido. The gallery is uncluttered white walls, the lido decay and nature.

The public can visit the gallery but not the lido so the proposal must link the lido to an audience in the gallery. The lido can be used to install objects but not equipment or lighting. At the end of the gallery is a barred window which overlooks the lido, also access to the roof of the gallery can be made available for photographers/artist, a periscope for example could be installed. 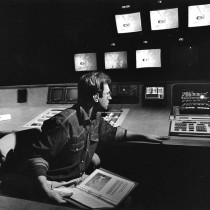 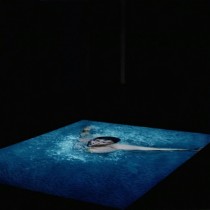 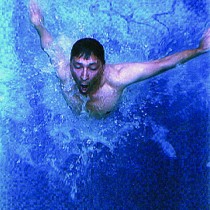 The appeal of this commission was in relation to the contrast between the “white walls” of the gallery, and the “decay and nature” of the lido. I felt that I could produce an electronic blend of images that would pull the two contrasting aspects of the site together. The fact the lido was empty and disused was very attractive, as I was interested in continuing my work with fluid water images, and I felt the absence of ‘real’ water in the lido would be a wonderful counter-point to the electronic water that I proposed for the gallery space. I envisaged an electronic link between the two that would be echoed by the relationship between the lido and the gallery via the “small barred window” referred to in the description.

My original outline for the Cafe Gallery proposed a large scale video sequence of a swimmer projected onto a raised platform in the centre of the gallery space. This sequence would be interrupted periodically by a ‘live’ video image of the derelict lido, projected in the place of the pre-recorded swimmer. I proposed to make a piece that worked on several key opposites, a blending of live images of the present with pre-recorded aspects of the past, a work that brought together aspects of the interior of the gallery and its exterior surroundings, with references to the electronic and the ‘real’:

Cross-currents is concerned with temporal and spatial transitions or crossings, where inside and outside meet; where past activity is revived technologically in the present; where illusion meets concrete reality. These multiple crossings are achieved technologically and electronically through the wires that connect the two spaces. The solitary swimmer underlines this theme by repeatedly crossing the floor of the gallery, and simultaneously cross-referencing with the still images arranged sequentially around the walls.

In Cross-Currents movements across the frame were extended to include the temporal and institutional spaces, so that the two ‘frames’ represented in the work cut back and forth between the past and present and between the interior of the gallery and the outdoor lido. Aspects of ‘nature’ in the installation were presented as a force, that were eradicating and transforming the exterior site through the agency of time. The live camera looking at the overgrown swimming pool was in the ‘here and now’, at least temporarily- the date and time displayed along with the image, each time it appeared on the screen, and continuously in the gallery space on a small plinth-mounted television monitor. Significantly, the camera could also be seen ‘live’. Gallery visitors could peer through the tiny gallery window through a gap that I had hacked through the mass of undergrowth that had sprung up between the gallery and the lido, to catch a glimpse of the deteriorating lido and the scaffolding with its mounted surveillance camera.

The videotape of the swimmer also involved the exploration of time structures. Using techniques of temporal sequence manipulation learned from my study of Steve Reich, I used a reverse of the device employed for Slow Motion Music (1968), beginning my swimming sequence in ultra-slow motion and gradually returning to normal speed in stages.

In terms of the video technology, the installation explored the potential of several special techniques. The commission budget, although not substantial (œ3,000 production costs) facilitated access to high quality production facilities. The swimming sequences, were shot on “Betacam”, a television broadcast format, chosen to enable the use of variable speed slow-motion in the post-production and editing process discussed above. The soundtrack was also slow-motion, and required the use of digital sound manipulation to reproduce the effect of the accompanying synchronised water sounds.

Cross-Currents was the first major video projection piece I made, although I had made a special projection piece for a weekend one-man event at The London Film Maker’s Co-op in 1992 called Heaven and Earth. LCD video projectors at this time were comparatively new. Still bulky and with relatively low illumination levels they were nevertheless opening up a new potential for video installation work as they were far less costly, and much more compact than the CRT based video projection systems that had been around since the late 1970’s. The major aesthetic disadvantage of video projection was the resolution, as the 625 line image, when projected revealed not only the lines, but the pixels, degrading the image considerably especially if the image was viewed from close proximity. These limitations aside, the possibility of projection of video opened up a new range of possibilities for gallery installation, not least because it freed the artist from the ‘box’ of the television monitor with all its connotations, and because the video image was no longer restricted to a particular shape or aspect ratio.

The intercutting between the ‘live’ surveillance camera mounted on scaffolding above the lido was accomplished using a custom-made switching device, which allowed the playback deck running the swimmer tape, to cut to a live ‘line’ input during its rewind mode. This meant that at the end of each tape cycle, timed to co-incide with the swimmer jumping forward and up towards the camera, the player went into rewind and switched into ‘stand-by record’ mode, thus displaying the camera signal fed into the line input. Once the tape had rewound, it switched back into ‘play’ mode, displaying the tape source.