Eau d’Artifice, originally commissioned by the Harris Museum, Preston in 1990 was originally conceived as a video wall ‘in the round’. The main sponsor of the exhibition, Samuelson’s Communications, had offered access to video wall technology- the loan of the necessary hardware and software plus the programming expertise. My proposal was to construct a unique video wall, expanding the nine monitor Imaginary Fountain (1989)  to a structure of thirty five identical monitors, stacked in seven concentric rings of diminishing size. Thus the bottom row comprised of a circle of eight monitors, the subsequent seven, the next six, and so on.

In the original plan the image sources would have been programmed to change in a cyclic and fluid manner, electronically imitating the cascading patterns of water in a ‘real’ fountain. Tests were made at Samuelsons in London to determine whether my plans to stack the video wall monitors in the above configuration was practical. In my original sketches I had assumed the monitors would be strong enough to support each other in the way I wanted; the bottom row would have to support the spread weight of the twenty six monitors above them.

The tests proved the structure would work, and a schedule was drawn up to include shooting, editing and programming of the video sequences. Samuelsons also had plans to show the piece as part of the “Canadian Cultural Festival” (Sept. 10th-24th, 1990) in the newly-completed Broadgate Centre in the City of London, at a site donated by a Japanese bank, and were actively seeking additional sponsorship. 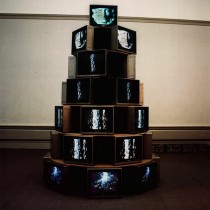 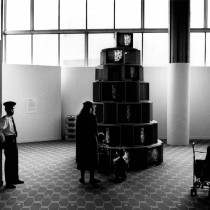 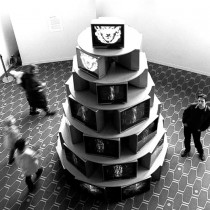 In the final event, however, unforeseen problems developed. The sponsorship did not materialise, and internal problems at Samuelsons (including the alleged resignation of their “Electrosonic” programmer) forced them to withdraw the video wall programming technology. The Broadgate show was canceled, and although Samuelsons agreed to provide me with the video facilities to shoot and edit the sequences, and the monitors and video players to display the piece at the Harris, there was to be no video wall programming.

I had to rethink my ideas for the piece at this stage, as the use of the programmed cascading imagery had been central to my conception of the electronic fountain. I decided to keep the installation structure as planned, displaying four separate synchronised image sequences. I divided the circular pyramid formation of monitors into four zones- tape source ‘A’ to the bottom row (eight monitors); source ‘B’ to rows two and three (thirteen monitors); source ‘C’ to rows four and five (nine monitors) and source ‘D’ to rows six and seven (four monitors).

The four image sequences would correspond to the components of a fountain with a ‘source’ at the top, two separate cascading sections, and a ‘pool’ at the bottom. I planned a kind of ‘narrative’ to the sequences, so that the fountain would go through a cycle- a compressed ‘day’, in which the fountain began cool in the early morning, then lit with warm daylight, as shadows moved round reaching sunset after which the water spout was shut off, allowing the pool to settle to reveal the sculptured classical face of the spout reflected in its still water.

So the intended computer-generated cascades had to be abandoned in favour of a more practical approach. But this change to the formal intentions of the piece led me to consider more carefully the question of the spaces between the screens, as movement down from the top of the fountain to the pools became something that occurred in the mind of the spectator rather than through the agency of computer technology. The illusion was now of a different order, as there was now no sequential movement from screen to screen, simply the illusion of movement down the fountain structure. What was initially a set-back and a disappointment turned into an opportunity to think about the questions that arose about the nature of the illusion, and the spectator’s complicity in its construction. The technologically-driven video wall would have been more spectacular, but also less participatory. I decided that the tension in my new video fountain should be centred on this relationship between the audience and the work, and that all the technology should be as visible as possible, and presented as an integral part of the work.

An important aspect of this audience participation, was physical, or sculptural. From a reading of the phenomenologist Maurice Merleau-Ponty, I had become interested in the notion that perception was a bodily process- a concept of the body as “an intertwining of vision and movement.” In “Eye and Mind”, written just before his death in 1961, Merleau-Ponty wrote:

I have only to see something to know how to reach it and deal with it, even if I do not know how this happens in the nervous machine. My mobile body makes a difference in the visible world, being part of it; that is why I can steer it through the visible. Conversely it is just as true that vision is attached to movement We see only what we look at. What would vision be without eye movement?

My decision to concentrate on video installation was centred on a desire to explore and develop the sculptural and tactile aspects of image-based technology which I felt were implicit in the video medium. The move away from screen based video tape had been prompted partly by an interest in developing strategies for engaging the viewer more actively in the perceptive process- to encourage an active awareness. My idea for an ‘in the round’ video wall had been one facet of that strategy; I hoped to encourage the viewer to literally ‘take a walk around the work’, and my decision to present the technical equipment- the playback decks, cables etc., was part of the same approach.

In order for the image sequences to provide the participatory illusion of the ‘fountain’, the four image-sequences needed to remain synchronised, and as each video player had to rewind every hour (the maximum duration of the ‘U-matic’ source tapes) the playback decks were electronically ‘locked’ together using a newly available, custom-built device called a “synch-starter”.

The synch-starter, originally made for the exhibition of multi-screen work at Montevideo in Holland, was first used in the UK during the 1989 Video Positive festival. With this device, it was possible to accurately synchronise up to seven video players by using the control-track (a series of timing pulses recorded onto the tape used during editing) of the U-matic system. The synch-starter allowed the players to rewind independently, but held each machine in pause mode until all were rewound and cued up to the first frame of the video sequence, and then released them simultaneously. This synchronising technique was extremely effective and surprisingly reliable, and opened up a new set of possibilities for multi-screen work for me. My subsequent sculptural multi-screen installations all used this technique to ensure accurate timing between screens.

The use of shifting colour changes refers back to Field Study, but in Eau d’Artifice the use of these colour shifts is less formal, used for distinctly “narrative” reasons. The narrative in Eau d’Artifice exists only in its temporal dimension, and it is only revealed by watching the work for some time. My intention with this temporal illusion was to reinforce the idea of the work as a total ‘shape’. It becomes a ‘fountain’ in the viewer’s mind through two related perceptual processes; the viewer fills in the space between one screen and the next, completing the flow between the screens, and that the viewer sees the illusion of the fountain evolve. It is also an aspect of the work which only exists in its performance and not something which comes across in any documentation of the work.

The twenty two screens that occupy the four layers of the central image zones of Eau d’Artifice dominate the field of view, and these screens are predominately blue. This overall impression of blue inspired my reference to Kenneth Anger’s 1952 film Eaux d’Artifice– literally translated as ‘artificial waters’, the title being a play on the French word fireworks- ‘ feu d’ artifice’ .

The colour changes in Eau d’Artifice were all accomplished by controlled lighting and the use of colour filters during the shooting rather than post-production manipulation. In this sense the work anticipates later interest in the nature and properties of light as part of an investigation into notions of flow and flux. But Eau d’Artifice grew most directly from the concerns and ideas that surfaced through the making of The Stream as is clear from the statement I wrote at the time of the Harris exhibition:

The idea of an electronic fountain connects to my interest in using images and sounds which parallel the video and audio signals themselves, which are, in essence, streams of flowing electrons travelling along the cables from their source to the display which forms the final images and sounds we see on the screens and hear from the speakers. This in turn can be understood to have a further parallel to the flow of human thought, moving from the perceiving receptors of eye and ear to the continuous movement of ideas through the mind.

Eau d’Artifice was my first major commissioned video installation, and galleries were by this time beginning to see the potential for video installation work. An Arts Council funded initiative, MITES (the Moving Image Touring and Exhibition Service) had been recently established in Liverpool under the auspices of Merseyside Moviola for the provision of video display equipment at subsidised rates. The establishment of this facility was for the first time making the exhibition of large scale video installation possible in the UK.

Having discovered the potential of the synch-starter for accurate multi-screen installation work, and interested to further explore the participatory possibilities opened up by the imaginary space between screens, I developed a proposal for a new work that would encourage audiences to engage with fluid movement across the gallery space.