Perpetual Motion is in several important ways a departure from my approach to previous installation work. It is my first installation to use digital imaging exclusively. The two image-sequences (there is no sound) were produced using computer software and digital image processing, exploring the ‘infinite’ looping potential of the computer system. The work also features the use of ‘renewable energy resources’, drawing on ideas that had developed out of a period of research into the production of a semi-permanent outdoor video installation for the Chiltern Sculpture Trail. This research project, funded by the Arts Council of Great Britain, did not result in a completed installation, but produced a feasibility study.

In other important ways, Perpetual Motion continued themes and ideas that were consistent with my previous installation work. The tension between images on screens and the spatial relationships developed from the display apparatus in the gallery was still a central concern, as was the production of a sculptural dimension arising from movement across and/or between screens.

The use of images of ‘nature’ and the references to natural processes in contrast and relationship to the use of technology was becoming an increasingly important theme in my work. Perpetual Motion draws directly on the experiences of making Eau d’Artifice, Streamline and Cross-Currents, but also extends the ideas which surfaced in those works by refining the balance of conceptual relationships between the elements of the installation and the method of display. 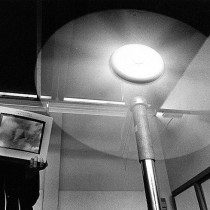 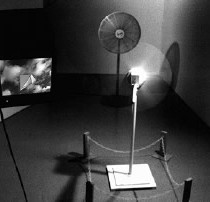 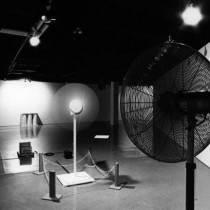 In Perpetual Motion flow has become a physical experience- the wind turbine which creates the flow of electricity is driven by a flow of air that the visitor can feel. He/she is prompted to make the connection between the flowing movement of air and the flow of electricity and images by a direct physical experience which has a conceptual relationship to the ideas behind the work. This is reinforced by the arrangement of the technical apparatus responsible for the production of the images in the gallery space, and the interconnecting cables which link them in series.

The use of digital techniques was an important feature of the work, the image-sequences produced using computer technology had, if anything, a more artificial appearance, seemingly even more distanced from the original source material of the natural world. The image sequences in Perpetual Motion were produced using a number of computer software packages. The flying kite and sky were created by combining photographic images which had been manipulated and processed in “Adobe Photoshop”, and then combined and animated in “Macromind Director”. These software packages allowed me to produce an image which had a combination of ‘realism’ and artificiality that I required. The photographic qualities of the kite and sky were retained but ‘treated’, to resemble the image from a postcard, and the kite’s movement was artificially produced and cycled which gave it an deliberately ‘mechanical’ look.

The grass sequence was shot on analogue video (Hi 8 format) and then digitised (using software called “Quicktime”) slowed, and finally looped, so that when projected, its low resolution and jerky movement was very obviously deliberate. I wanted images of nature that were clearly manipulated and mediated- as if fragments of nature (and aspects of the natural world) were trapped and contained.

The equipment and devices which comprise the installation are all arranged in a logical, almost schematic way, with a chain of interrelated objects moving across the gallery space. A ‘wind machine’ (a large industrial fan) is plugged into a conspicuous wall -mounted mains plug, the stream of air and roar of the machine filling the gallery space, causing a wind turbine facing the direction of the wind to turn rapidly. Visitors can follow the cables connected to the turbine up into the gallery ceiling where a small colour video monitor is displaying the kite flying sequence described above. The projector is also ceiling-mounted, creating a rectangular patch of waving digitised grass on the gallery floor in the area beyond the wind turbine.

Perpetual Motion has been staged a number of times, with arrangements varied in relation to particularities of the gallery space. For example, at the Saw Gallery in Ottawa, where the exhibition space was narrow and wedge-shaped, the wind machine was floor-mounted at the narrow end of the space, which allowed the air currents to be funnelled outwards across the gallery with the apparatus set up in a logical sequence in a progressive line across the space. Visitors entered the exhibition space from the far (wide) end, and first encountering the piece head-on, and were encouraged to walk through the piece negotiating the elements as they progressed towards the wind source.

At the Castlefield Gallery in Manchester, which has a square exhibition space, the wind machine was wall-mounted in one corner, and the equipment arranged diagonally across the space. Visitors encountered the piece from the side, thus reading the elements from left to right, and were therefore less inclined to engage with the elements in a sequential fashion.

Another concern that continued to be significant from previous installation work was the relationship of perceptive thought to the decoding and reading of the work. I was still very interested in finding ways to produce an awareness in the viewer of the perceptual process at work during a viewing of the work, and to make him/her conscious of this as part of the function and intention of the installation. This is summed up clearly in the proposal for Perpetual Motion :

A major theme in my installation work is flow. The flow of information, of thought, and of matter, and the constant flux of time which binds them. Crucial to this is the notion of the interdependence of these concepts, and the possibility of a consciousness which can move freely across them. I am concerned with making work that explores and celebrates this constant flux by drawing attention to the process of thought, and its free ranging movement as it shifts focus.

In a sense, there had been a progressive development away from the ideas of ‘shape’ that were present in Eau d’Artifice and, to a lesser extent, in Streamline. With Cross-Currents, I had initiated a shift towards a kind of ‘schematic’ approach, in which the linked elements were to be read sequentially and made to form a ‘map’ in the mind of the viewer rather to be read ‘all at once’ and so perceived as a cohesive ‘whole’. The elements in Cross-Currents and Perpetual Motion still could be seen to be producing an overall conceptual ‘object’, but to reach that point, the viewer needed to follow a kind of map, which by so doing s/he would be made conscious of the process of building the whole from its elements. My ideal was that all this should happen simultaneously, and that consequently the viewer would take away these two co-existent models in his/her mind. I think here I was trying to make my work operate both (and simultaneously) as sculpture, and as film or music. The viewer “takes his body with him” as I had learned from Merleau-Ponty, but as with other more time-based media such as cinema or music in which the perceiver is active only mentally and/or emotionally, a memory of ‘shape’ is also important. Rudolf Arnheim, speaking of the relationship of memory to film wrote:

.to understand the structure of a film or a symphony, one has to grasp it as a whole, exactly as one would the composition of a painting. It must be apprehended as a sequence, but this sequence cannot be temporal, in the sense that one phase disappears as the next occupies our consciousness. The whole work must be simultaneously present in the mind if we are to understand its development, its coherence, the interrelations among its parts.

This desire to take this participatory process into the realm of the conscious can also perhaps be seen to derive from an analysis of the perception of the natural world. In Landscape and Memory, Simon Shama describes the process:

For although we are accustomed to separate nature and human perception into two realms, they are, in fact, indivisible. Before it can ever be a repose for the senses, landscape is the work of the mind. It’s scenery is built up as much from strata of memory as from layers of rock.

This relationship between landscape, memory and perception is for me highlighted by a personal experience connected with Shama’s book. I heard about Landscape and Memory on my car radio whilst driving through the Yorkshire Dales and I found and bought it in a bookshop in Maryland, Virginia, whilst attending a conference on Art, Culture and Nature at which I was giving a presentation on Perpetual Motion.