Some Notes & Thoughts on Mothlight [University of Pisa/Museum of Natural history, Calci, Italy]

Mothlight was funded by North West Arts, with support from the University of Central Lancashire to produce computer-animated moth-flight sequences to be displayed on solar-powered video monitors. Since my initial proposal, the idea for the installation has expanded from one piece into a series of related works. This approach has evolved out of my realisation that the form I have conceived for Mothlight has the potential for numerous variations,and I felt it important to explore these ideas through the development of a series of related works which would take shape as “variations on a theme”. These variations include both the physical configuration of the elements of the installation and the relationship between the images and sounds on the screens, as well as permutations of the moth flight sequences 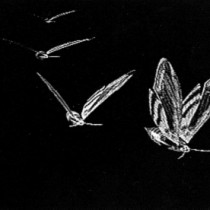 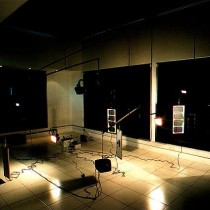 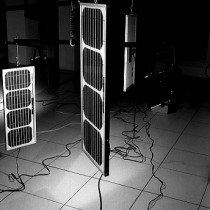 The term ” a bug in the system” was coined in 1945 to describe problems associated with computer programming. At the computer lab at M.I.T. in Boston, a prototype computer system developed an operational fault. Because the room-size machine’s electronic valves needed to be kept cool during the long hours of calculation, all the windows in the lab housing the machine were kept open. During the night flying insects had entered the room, adversely affecting the operation of the computer. The engineer’s log for that particular day includes a description of the fault as being due to “bugs” in the apparatus, and even included the insect in question- a moth, which was carefully preserved between the pages. The flying insects in Mothlight are computer-generated, themselves the product of a computer program, intentionally making an ironic reference to this bit of scientific history, and alluding to the uneasy relationship between the natural world and the technological.

My decision to produce a computer-generated artificial moth was influenced by the above story, but it was also in keeping with earlier works. (For example Eau d’artifice (1990), an electronic fountain created from separately recorded elements playing out over a simulated “day”. Streamline (1991), an artificial stream made of 9 individual “set” constructions, pieced together to form a “narrative”, or Perpetual Motion (1994) kite, clouds, sky and grass, electronically combined to suggest a landscape.) Themes of conflicts and interrelationships between natural and artificial- “the made” and “the born”, between technology and nature are at the heart of all my video work.

My video installation work involves both sculpture and the moving image in interrelationship. The relationship of the elements- the repeating cycle of the fluttering moths, the suspended solar powered video screens illuminated by the halogen lamps, all connect to form an interdependent cycle of meaning.
Light is an important theme in this piece. Light illuminates, powers and conceptually connects the images and objects within the work.

My interest in the relationship between technology and nature is a major concern. In Mothlight the use of “renewable resources” is subversive. Solar panels aren’t used to generate electricity, but act as passive conductors, transducing light from the domestic mains power point. Meanings are created via an inversion of the ‘conventional’ application so that electricity is serving the poetic, rather than the technological.

The various elements which constitute the work are held in a physical balance- the solar panels, the illuminating lamps, the video screens, are arranged in a delicate counterbalance, so that the physical balance echoes the conceptual balance of the interrelated elements.

The structure of Mothlight is an attempt to make a work that suggests balance and movement. The counterbalance was apparent when the piece was in the planning stages, but once the piece was built, the mobility of the linked elements was also clearly visible. In a journal entry I asked if the “mobile should be mobile”, and my conclusions are clearly that it should be, insofar as this was practically possible. The whole work is of course a play on the idea of a “mobile” (the title of the genre of sculpture that this work draws on and refers to.) but it also makes reference to the image of the moth as an illusion of mobility. The animated insect is tied to a predictable and endlessly repeating flight path, tethered as much as the various functioning physical elements of the work are constrained by the trailing cables. It is this illusion of movement which is at the heart of the piece. The video monitors are placed in such a way that the viewer accepts (even if s/he knows better) the possibility that the moth is flying across the gallery space- flitting from one suspended screen to the other, and this is reinforced by the panning soundtrack and by the movement of the animation through the illusory space of the TV screen . It is possible to see the fluttering moth sequence as a reference to the flickering origins of the film and video image itself, so that the work can be read as a set of “nested” illusions- starting with the flickering origins of moving image technology and moving outwards through the illusion of movement via the mechanics of perspective (both sound and picture), to the illusion of the mechanical mobility of the sculptural form of the work.

Mothlight: A review of the Installation at the Certosa di Calci , Pisa, Italy

Meigh-Andrews is an English artist who worked with the video image during the 80s, putting forward its semiological aspects. In his research, he grew increasingly interested in natural images transfigured through a series of manipulations which create an artificial, alchemical world. The installations of the 90s focus, lastly, on a fundamental topic – the physic flux and its parallelism with the mental flux, and the possibility that one activates the other.

The installation at Calci plays on this twofold aspect – some halogen lamps illuminate four solar panels which feed some monitors which generate some moths. The whole process is an infinite cycle that the spectator mentally builds through a linear series of logical passages. The thinking flux also establishes a connection among spatially discontinuous elements.

Mothlight puts forward another characteristic also present in other works of the artist – the search for contradiction, specifically the “ironic” exploitation of alternative energy. The viewer that has patiently reconstructed the path of energy cannot miss the fact that the solar panels are fed by the halogen lamps .
Perpetual Motion , 1994, is regulated by the same principles – a video-kite shakes its tail to the wind from the ceiling of the hall, while a grassy video-rug is moved by the gusts. The scene is dominated by a real fan, but the Aeolian flux that the spectator experiences physically is deceptively responsible for the movements in the sky and on earth – the fan is ironically and poetically the motory genesis – for its energy is used to feed the monitors on which images flounder about.