Description
At the edge of a wooded area in Grizedale Forest, Cumbria, overlooking Coniston Water a large tree has been temporarily equipped with four video surveillance cameras arranged in a circular formation around the trunk at height of approximately 8 metres. The images produced by the four cameras are relayed via a video switcher to a weatherproof LCD display mounted at the base of the tree. The speed and direction of the camera image flow is determined by the velocity and direction of the wind. The entire system is powered by a wind turbine and four solar panels which are also mounted within the tree.

Background Ideas and Concerns
For some time I have wanted to make an outdoor video installation that responded to it’s environment. (1) Working with Catherine Elwes and John Calderbank in the early 1990’s, I conducted a period of research into the feasibility of building a permanent outdoor video sculpture for the Chiltern Sculpture Trail at Cowleaze Wood in Oxfordshire. (2) Although this early project did not proceed beyond the report stage, I drew on this experience to produce a number of gallery-based video installations which utilised solar and wind power including Perpetual Motion (1994), Fire, Ice & Steam (1995) Mothlight (1998), Mothlight II (2001) and For William Henry Fox Talbot (The Pencil of Nature) 2002. (3) 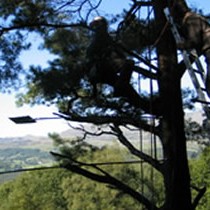 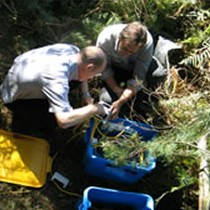 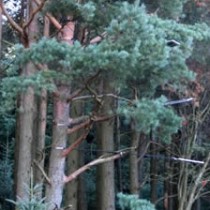 The notion of constructing an outdoor video installation in the landscape contains many of the contrasting and contradictory aspects that I enjoy working with. It juxtaposes the natural and the artificial, making use of technology intended for interior use and placing it outdoors. I want the strength and fragility of the technology to be contrasted with the durability and vulnerability of the tree it is fused with and the landscape it is placed within. I am interested in highlighting and contrasting different notions of temporality, permanence and impermanence. The specific video images produced by the installation are in themselves of no direct consequence- they are simply part of a flow of very subtly changing ephemeral moments. For me, the relationship between the light and the wind is at the core of the work. The light and wind provide the source of the images both in terms of the generation of the electrical power which supports the video and electronic apparatus, and in terms of the direct physical and visual experience which become part of the work. (Day/night, ambient light and the movement of clouds, and foliage, the changing weather conditions, etc.)

It should also be noted that the work itself, like the image-sequences it produces, was transient. The components which constitute the work were clamped to a living tree for a period of ten days. The various bits of inexpensive technology – wind turbine, solar panels, video cameras, image switcher, LCD video display, cabling, etc. were temporary modifications, which, once removed, left no trace. During the period in which the prototype installation was functioning, it was left switched on, running night and day for as long as the technical systems remained operational. Designed to be self-powering as long as the weather conditions provided sustaining light and wind, the installation was equipped with two large capacity rechargeable batteries capable of powering the installation for approximately 72 hours. Located on Forestry Commission land, it was relatively inaccessible, although accessible via an unpaved road. From a distance the solar panels and the wind turbine would certainly have aroused the attention of curious by-passers. However, the casual visitor coming across the installation would find no explanation or context for the piece, what it was, why it was there, or what purpose it might have. Visitors were free to respond (or not) and to offer up their own explanation for it’s existence

The Site and John Ruskin
The location of the prototype outdoor video piece at Lawson Park was significant, as the site was on land once owned by John Ruskin, the influential Victorian English writer and critic. Ruskin’s passionate enthusiasm for the landscape of this area is well documented, not least in his published lectures and prolific diaries. His detailed descriptions of the ceaselessly changing views of the “Old Man” above Coniston Water, of cloud formations and vivid skies provide a compelling sense of this dynamic landscape:

From the west the wind blows fiercely towards you out of the blue sky. Under the blue space is a flattened dome of earth-cloud clinging to, and altogether masquing the form of, the mountain, known as the Old Man of Coniston.

The top of that dome of cloud is two thousand eight hundred feet above the sea, the mountain two thousand six hundred, the cloud lying two hundred feet deep on it. Behind it, westward and seaward, all’s clear; but when the wind out of that blue clearness comes over the ridge of the earth-cloud, at that moment and that line, its own moisture congeals into these white—I believe, ice-clouds; threads, and meshes, and tresses, and tapestries, flying, failing, melting, reappearing; spinning and unspinning themselves, coiling and uncoiling, winding and unwinding, faster than eye or thought can follow: and through all their dazzling maze of frosty filaments shines a painted window in palpitation; its pulses of colour interwoven in motion, intermittent in fire,—emerald and ruby and pale purple and violet melting into a blue that is not of the sky, but of the sunbeam;—purer than the crystal, softer than the rainbow, and brighter than the snow.  (4)

For me, a connection to the cultural history of the site is an important element to the context of the work and deeply connected to a sense of the location. My intentions in the long term are to create a landscape installation that is a part of the landscape in which it is sited, a work that responds directly to and in relation to its location.

The Item Project
This research, funded by NESTA (National Endowment for Science, Technology and the Arts) and the Arts Council of England, is one of six projects selected by FACT (Foundation for Art and Creative Technology) in Liverpool. Each of the projects specified that an artist work in partnership with a technologist The goal of my project was to construct the prototype for a planned semi-permanent work, and as such it is subject to further experimentation and modification. The opportunity to make and install this prototype has given us the chance to uncover further creative challenges which we have yet to meet. Making and installing the piece at Lawson Park and observing the problems that have emerged has moved us much closer to our final goal.

1. In this aspiration I have drawn on two artist’s films made in the 1970’s: Michael Snow’s La Region Centrale and Chris Welsby’s Seven Days.